By Bruce Acosta of the Columbia Spectator. Originally published April 22, 2019. Click here to view the article in its original format. 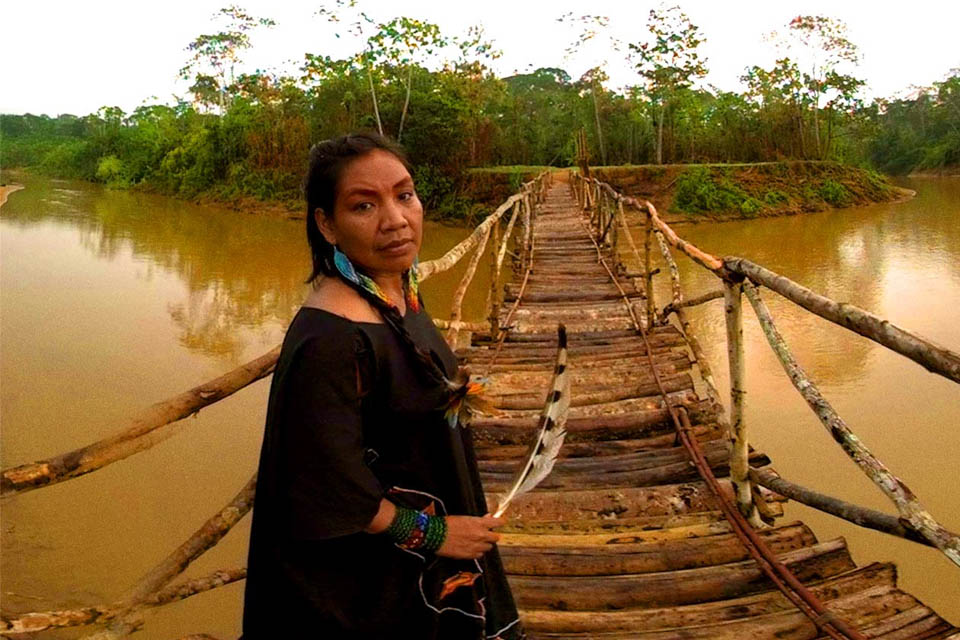 COURTESY OF / FACEBOOK – Hushahu, the first female shaman of the Yamanawa people, from Wallworth’s film “Awavena.”
Leonardo da Vinci’s “The Last Supper” is not typically thought of as a work that involves cutting-edge technology. However, for Australian artist and film director Lynette Wallworth, the masterpiece represents a daring foray into the use of oil paints—the newest artistic “technology” of da Vinci’s era. Like the vibrant colors introduced by oil paints, Wallworth’s exploration of virtual reality in film offers viewers a more vivid experience.“The role of many artists over centuries is to explore and work with new technologies,” Wallworth said in a presentation on Thursday, drawing a comparison between “The Last Supper” and the role of virtual reality technology in her own art.

Wallworth spoke about her work in the Katharina Otto-Bernstein Screening Room at the Lenfest Center for the Arts. Frequently employing immersive technologies, Wallworth’s works include the fulldome feature “Coral,” the documentary “Tender,” the interactive video “Evolution of Fearlessness,” and the mixed-reality films “Collisions” and “Awavena.”

The presentation was followed by a Q&A session moderated by writer-director and School of the Arts film professor Katherine Dieckmann. Additionally, “Collisions” and “Awavena” were screened at the Lenfest Center throughout the week from April 13 to April 19.

Wallworth made “Collisions” and “Awavena” at the invitation of the Martu and Yamanawa, indigenous peoples of Western Australia and the Amazon, respectively, whose relationships with the environment she explored in these films. The viewer’s direct participation in experiencing and activating her work helps them understand this relationship.

The Emmy award-winning film “Collisions” introduces the viewer to Nyarri Morgan, an elder of the Western Australian Martu tribe who witnessed the nuclear testing conducted in the Australian Outback during the 1950s. At one point, the viewer witnesses the devastating effects of a nuclear explosion on the desert landscape and its wildlife, experiencing the haunting memory that Nyarri recounts.

Wallworth came to a realization about the story the Martu people wanted her to tell in “Collisions” after she went on a hunting trip with them.

“Awavena,” her most recent film, transports the viewer to the Amazon rainforest to follow Hushahu, a woman of the indigenous Yamanawa people. Virtual and augmented reality technology simulate the medicine-induced visions that Hushahu undergoes in her journey to become the Yamanawa’s first female shaman.

In these simulated visions, the forest moves and distorts according to the direction that the viewer looks. According to Wallworth, these visual effects reflect the Yamanawa’s belief that the forest is alive—an ecosystem that is aware of its inhabitants.

Besides being featured at the Sundance Film Festival, both films have gone on to receive greater exposure in the political sphere.

In 2016, following its premiere at the World Economic Forum in Davos, Switzerland, “Collisions” was screened at the United Nations First Committee on Disarmament meeting in New York. The following year, it was presented at the UN Comprehensive Nuclear-Test-Ban Treaty meetings in Vienna as well as for the U.S. Department of State. Its screening at the Australian Parliament was followed by a historic vote in favor of a new resolution to ban nuclear weapons. “Awavena” was also screened at the World Economic Forum in Davos in 2018.

Beyond technological difficulties, Wallworth also acknowledged the cultural questions that complicate her work with indigenous peoples.

Wallworth described realizing her own cultural misconceptions while working on “Awavena.” She recalled her concern about filming the Yamanawa spiritual leader Tata as he performed rituals,

wondering if the camera would be a distraction for him. Wallworth fondly recounted learning that Tata prays not only for his community, but also for the “holy world”—including Wallworth and others, even if they are unaware.

Technology—in this case, the camera—was not an obstacle, but an aid in making Tata’s prayer universal.