By Natalie Harms at Houston Innovation Map Originally published April 26, 2019. Click here to view the article in its original format.

The solution to Houston’s workforce problem might be right in front of our eyes. Getty Images

Everyone’s job has training associated with it — from surgeons to construction crane operators — and there’s a growing market need for faster, more thorough training of our workforce.

“The best way to learn how to do something, is to just get out and do it,” says Eric Liga, co-founder of HoustonVR. “But there are a lot of reasons why you can’t do that in certain types of training.”

Augmented and virtual reality training programs are on the rise, and Liga cites safety, cost, and unpredictable work environments as some of these most obvious reasons reasons to pivot to training employees through extended reality. This type of training also provides portability and has proven higher retention, Liga says in his keynote speech at Station Houston’s AR/VR discuss on April 25.

“You get a much higher retention rate when you actually go out and do something — physically going through the motions — than you do sitting in a classroom or reading a book,” he says.

As more companies are introducing this type of technology into the workforce, there’s a growing need for developers and experts to design these programs. Currently, it’s rare for a company to have employees with XR expertise.

“Working on commercial accounts, I see a lot of customers who have done enterprise software — web pages and forums — but it’s a very different skill set from simulations,” says Jared Bienz, senior software engineer at Microsoft.

So, companies are faced with hiring developers and designers to create these training programs. Ethan LeSueur, who oversees immersive technology at ExxonMobil, says his team benefitted from the cut-throat game design industry. So many developers want to go into video game creation, but there’s not enough jobs. At Exxon, developers get to create games — but for training purposes. LeSueur says he looks for a diversity of programming experience when hiring for these types of jobs.

“It’s important to not have one skill set,” he says. “We’re looking for the people who are sort of a swiss army knife. You don’t have to know everything, but if they have more than one specific skill set, that’s really important.”

But hiring a team might not be the only option to AR/VR development. Working with startups has been an avenue for major companies seeking out XR programs.

“People talk about digital transformation all the time, but half the time we wouldn’t know what that looked like if that slapped us in the face,” LeSueur says. “That’s what we’re asking startups to do — help slap us in the face.”

LeSueur says that proving cost effectiveness is extremely important for startups looking to win big companies as clients, but so is passion. The complexity of the process as well as all the red tap of business calls for passion from a startup.

“We’re trying to take a complicated physical process and digitize it,” LeSueur says. “That means there’s going to be a lot of back and forth.”

From the startup perspective, it’s not always easy working with major corporations – especially within oil and gas. Amanda, who works with construction clients and larger companies as an instructor at ITI, recommends having someone on the inside to look out for you.

“I think it’s really important to have an internal champion who really owns the product and wants to see it through to its last degree of integration.” 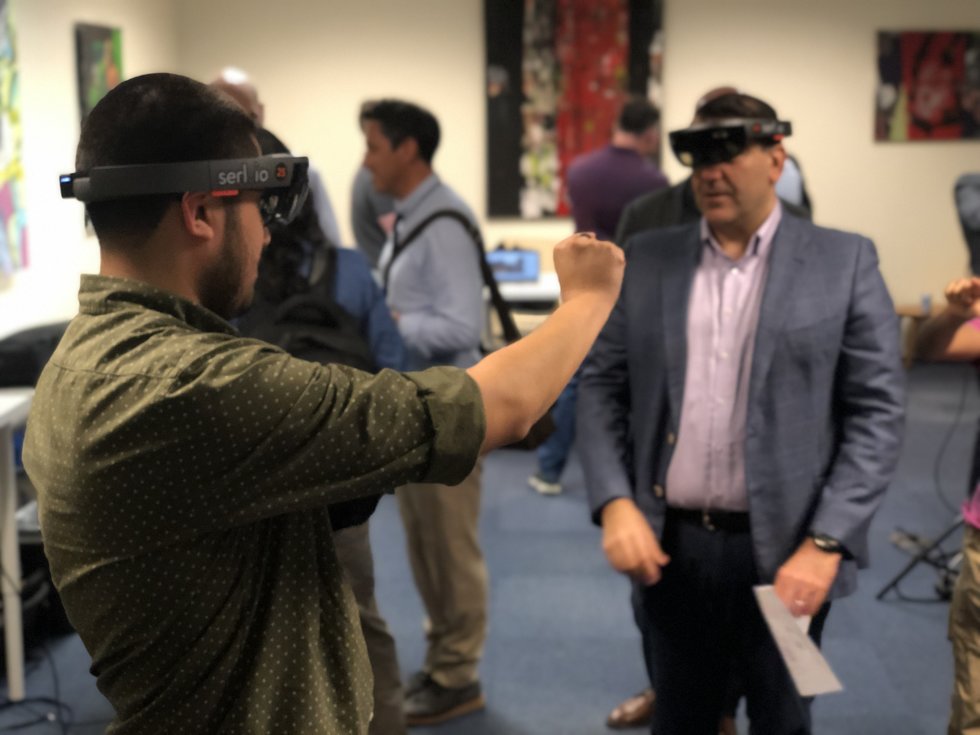 After the panel, Station Houston VR companies showed off their programming.